Are “Acts of God” a Thing When it Comes to Insurance? 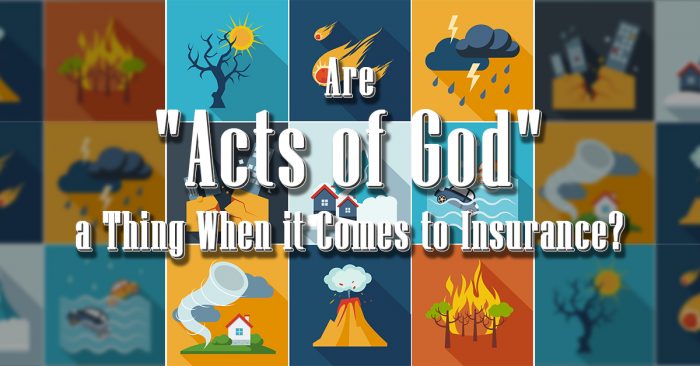 Are “Acts of God” a Thing When it Comes to Insurance?

We’ve all heard the expression “An act of God” when describing something that seems random or out of our control. In fact, there are several descriptions for what an “act of God” actually is. It is defined as “a natural hazard outside human control”, an “instance of uncontrollable natural forces in operation” and a “Force Majeure” related to events outside human control. Like flash floods, earthquakes or other natural disasters, an act of God generally makes us feel helpless. It is a recognition that no matter how much we do to prepare, there may be events that occur that are out of our control or the control of others. As it’s popular to say, “It is what it is.”

Legally, an “act of God” is actually peril technology that is a part of insurance coverage. It is understandably a bit confusing. For example, a lightning strike would be considered an act of God but a fire started by a shorted wire that occurs as the result of poor maintenance would not. A tree that falls as the result of lack of trimming or age would not be considered an act of God, but a tree falling as a result of 125 mph winds may. If damage or harm could have been prevented by routine care or maintenance, it is probably not going to qualify as “an act of God.”
When it comes to homeowners’ insurance, this can get a little complicated. For example, not all acts of God are covered under basic homeowners’ insurance policies. Some, like earthquakes, sinkholes, volcanoes and floods can only be covered by additional coverage in the form of a rider, addendum or a separate policy.

The bottom line is this. Yes, there are “acts of God” in insurance, but not every act of God is automatically covered by homeowners’ insurance. This is one of many reasons to have your insurance reviewed by a professional insurance representative annually.

There is always a tendency to assign blame, but accidents happen. There are “acts of God.” It is a way to hold everyone “harmless” in an unavoidable event.

Contact us to discuss your policy and how you are protected from these “acts of God”. We look forward to taking the mystery out of insurance coverage for you.

Are You Legally Required to Carry Business Insurance?

Are You Required to Carry Homeowners’ Insurance?

You’ve Never Been Where???