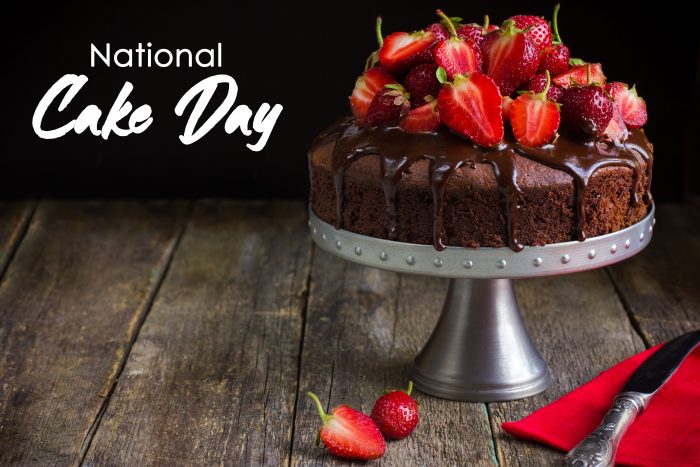 Which leads me to the question. . . Why do we eat cake on our birthdays?

What’s your favorite kind of cake? Is it red velvet, carrot, German chocolate, classic vanilla, marble? On your way home from work on this Monday, you have an excuse to pick up some cake mix and frosting. November 26th is National Cake Day.

Where did the idea of having cake on our birthdays stem from? Thanks to Reader’s Digest, I was able to find the answer to my question.

Egyptians: Ancient Egyptians had an interesting culture. From building pyramids to worshipping cats, their way of life is much different than that which we’re used to. When pharaohs were crowned, it was considered their “birth” as a “god”. The day this ceremony was celebrated was similar to today’s birthdays.

Greeks: Ancient Greeks believed in more gods than I’d ever be able to keep track of. Every aspect of life represented a different god. To the Greeks, Artemis was the goddess of the moon. As an offering, they made round cakes to recreate the image of the moon. This is where the idea of putting candles on cakes originated as well. They lit up candles on the cake as a metaphor for the way the moon shines.

Germans: In 18th century Germany, birthdays were celebrated, but were known as “Kinderfeste.” The Germans came up with the idea of putting the same amount of candles as the person’s age, adding an additional candle. The extra candle was meant to represent hope for another year; it was called “light of life.” However, the cake wasn’t eaten until after dinner even though the person received it in the morning. As candles burned out throughout the day, they were relit. This is where the tradition of making a “birthday wish” comes from as well.

Interestingly enough, ingredients to bake cakes were too expensive for this tradition to become common until the Industrial Revolution.

How lucky we are for the abundance of ingredients, making for a cheaper, but delicious birthday tradition!

Own a Bricks and Mortar Business? Look Out for These Liability Risks

Can You Guess the Earliest, Widely-Used Car Safety Features?

When Your Hobby Turns into an Insurable Collection

Do You Remember These “One Hit Wonders?”

When Should I get Life Insurance on My Child?

Why Are My Car Insurance Rates Climbing as My Car Gets Older?

The Benefits of Keeping Up With Your Home’s Value

They Eat What? Where? Dining Across the Globe